During this special of Designing Cities for All we will interview designer Satyendra Pakhalé about his book Satyendra Pakhalé Culture of Creation which was released in the midst of the Corona pandemic. This book explores the role of design in fostering the common good, uniting us all in today’s divided world. It is the outcome of three years’ labour of love, with contributions from a number of prominent design thinkers who delve deeply into Pakhalé’s oeuvre, covering a wide range of topics, such as the culture of making, social modernity, social cohesion, poetic analogy, perception and atmosphere, in which his thinking and design practice are rooted. During this program we will discuss Satyendra Pakhalé’s life and work and we will try to find out how this book came about.

You can attend this event physically or online. When making your reservation, choose between a physical spot or an online reservation.
With: 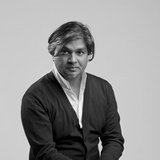 Satyendra Pakhalé
Design and Architecture practice
DossierDesigning Cities for All
The call for a fair, safe and healthy living environment for everyone.
Inclusive

Over the past two decades multi-faceted designer Satyendra Pakhalé has been working globally from his studio in Amsterdam since 1998. His design work is an act of unity going beyond any binary such as high- and low-tech, industrial production and traditional crafts, functionality and poetic significance. Pakhalé explores diverse cultural roots and creates contemporary objects and architectural spaces with the awareness that being a designer means being socially and culturally responsible, subject on which he has lectured worldwide at events such as CeBIT Hannover, Germany and Casa Brazil. The Design Academy Eindhoven (the Netherlands) invited him to devise and head the Master’s programme, Design for Humanity and Sustainable Living, from 2006 to 2010. His works are in permanent collections at major museums worldwide.

Folkert Lodewijks
Programmamaker
The moderator of this event is