We are proud to announce that Project for Public Spaces, Stipo, The City at Eye Level, Placemaking Plus and Pakhuis de Zwijger jointly organize the second global Placemaking Week from October 11 - 14 in Amsterdam. A unique momentum to show the world what great examples of placemaking Amsterdam has to offer, shed light on the importance of qualitative public space for citizens and learn from our global peers. For us, Placemaking Week should be the start of a city-wide strategy for more human centered public spaces in Amsterdam, and this Placemaking Meet Up will be a great start. Join us, and RSVP!

With over 40 years of experience as ‘founding fathers’ of the concept of placemaking New York based partner Project for Public Spaces brings expertise and a wide network. And we believe the conference is best organized in co-creation with that network. Therefore a Call for Proposals for Placemaking Week was launched the past months, which has led to no less than 350 submissions from 56 countries in total – to give an idea of the scale of engagement worldwide.

However we believe Placemaking Week should be well embedded in its host city Amsterdam, and showcase what initiatives we are all working on day to day. Therefore we would like to invite you for this Placemaking Meet Up to share experience and ideas in preparation of Placemaking Week.

The heart of Placemaking Week will be Pakhuis de Zwijger on 12 – 13 October with inspiring keynotes and breakout sessions, complemented with side events and site visits. On Tuesday October 10 we expect to organize placegames throughout the city, and Saturday October 14 will consist of excursions to markets.

The content of the Placemaking Week 2017 will be centered around 4 themes:

Read more about the conference on the website of Placemaking Week 2017. 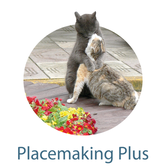 Questions or remarks regarding this program? Please have a look at our Frequently Asked Questions
This event is in English
Pay as you like
Workspace
These 70 people attended
This event is developed by

Ilirjana Haxhiaj
Thanks for your interest! Before we confirm your reservation, we'd like to ask you a few things.
This event is in English
Pay as you like
Workspace
These 70 people attended